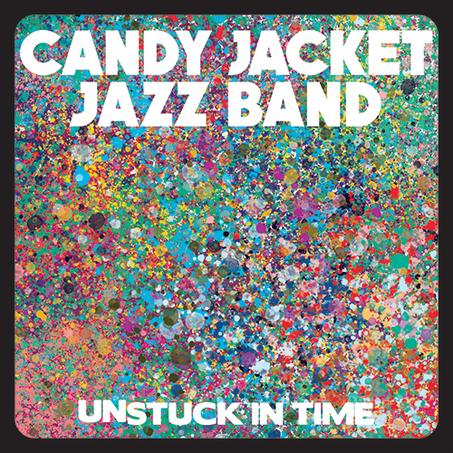 Yes, another wonderful new CD.  But remember: I told you to save your spare change, to make coffee at home instead of going to Starbucks, that there would be great pleasures in store.  But enough of that.  The four-minute video that follows might make prose superfluous: watch and listen to the end:

Josh Collazo is a magnificent jazz drummer: I had a great deal of gleeful first-hand evidence at the Redwood Coast Music Festival a short time ago to reinforce what I already knew.  He listens, he makes thrilling sounds, he leans forward into the beat so that any band he’s part of levitates.  But better than that, he has a huge imagination based in swing and melody, in danceable new music.  This is an elaborate prelude to say that his new CD, UNSTUCK IN TIME, by the organization he calls the CANDY JACKET JAZZ BAND, is an unerring delight.

This was no surprise: here is my delighted reaction to the CJJB’s first disc.

But let us return to whimsical-completely serious video:

And a few words about this disc’s glorious antecedents.  For me, one of the unheralded peaks of jazz happened while the official “Swing Era” was no longer at its apex: the period between 1942-7, more or less, that coincided with the more dramatic recording ban.  Because of that ban, small record companies had their pick of jazz artists — think Keynote, Blue Note, Comet, Savoy, Regis, Jamboree, HRS, Jazz Record, Musicraft, Black and White, Apollo, Sittin’ In, and a dozen others.  The music as passed down to us on recordings, loosely defined, moves from Art Hodes to early bebop, but the middle ground is what attracts me: small groups with a few horns, ample space for solos, but intelligent arrangements.  Why do I write of this?

Simply, because UNSTUCK IN TIME by the Candy Jacket Jazz Band seems to my ears a glorious extension of the best Keynote sessions.  I will even write that were someone able to narrow the sound and add some surface noise, many of the tracks on this CD could pass as previously-unheard and intensely refreshing Forties gems that had been overlooked.  It’s just that warmly idiomatic, sweetly rhythmic, and full of improvisational delight.

And the title is more than a verbal two-bar tag.  Josh and the band value time highly in the sense of knowing where “one” is, in keeping the rhythm going in the nicest ways (did I point out how splendid this CD is as dance music?) but they are not tied down by clock and calendar: this disc is not a poker-faced science experiment in the Jazz Lab, bringing 1944 forward by cloning it, but rather a blend of present and past swinging into the future, free to groove without concerns of “repertory” or “authenticity.”  I think of Golden-Era science fiction, full of alternate universes: “What kind of tune would Johnny Hodges like?”  And that spirit — to honor a Hodges-universe — lifts the music in performance after performance, honoring the innovators by refusing to imitate them except in exuberant playful ways.

I’m so grateful this light-hearted free-wheeling yet level-headed band exists.  Their inventive music is the very heart of what I hold dear.

Posted in "Thanks A Million", Bliss!, Generosities, It's All True, Jazz Titans, Mmmmmmmmmmmmm!, Pay Attention!, Swing You Cats!, That Was Fun!, The Heroes Among Us, The Real Thing, The Things We Love, Wow!