Tag Archives: WHEN SUMMER IS GONE

If cornetist Max Kaminsky (1908-1994) is known at all today, he might be categorized as “one of the Condon mob,” or, “a Dixieland musician.”  The first title would be true: Max worked with Eddie frequently from 1933 on, but the second — leaving the politics of “Dixieland” aside, please — would be unfair to a musician who played beautifully no matter what the context. 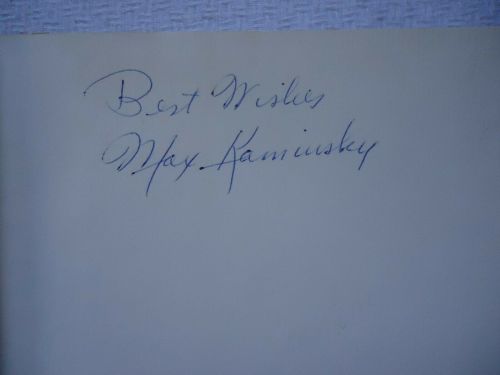 Here’s an early sample of how well Max played alongside musicians whose reputations have been enlarged by time, unlike his:

Here he is with friends Bud Freeman and Dave Tough as the hot lead in Tommy Dorsey’s Clambake Seven (Edythe Wright, vocal):

and a great rarity, thanks to our friend Sonny McGown — Max in Australia, 1943:

Hank O’Neal, writer, photographer, record producer, talks about Max, and then recalls the record, WHEN SUMMER IS GONE, he made to showcase Max’s lyrical side, with a side-glance at Johnny DeVries and the singer Mary Eiland:

You know you can hear the entire Chiaroscuro Records catalogue for free here, don’t you?

Back to Max, and a 1959 treat from a rare session with (collectively) Dick Cary, Cutty Cutshall, Bob Wilber, Phil Olivella, Dave McKenna, Barry Galbraith, Tommy Potter, and Osie Johnson, to close off the remembrance of someone splendid:

Let us not forget the worthy, alive in memory or alive in person.

Posted in "Thanks A Million", Bliss!, Generosities, Hotter Than That, Irreplaceable, It's All True, Jazz Titans, Jazz Worth Reading, Pay Attention!, Swing You Cats!, That Was Fun!, The Heroes Among Us, The Real Thing, The Things We Love, Wow!