Before writing this post, I was thinking about Rebecca (or Becky or Roo — she has many names, as appropriate to a multi-faceted personality) someone I have been listening to with awe and pleasure since 1994, perhaps beginning with I SAW STARS (Arbors).  As for Echoes of Swing, I got to hear them in person in Germany (in 2007, thanks to Manfred Selchow) and could tell them how I admired them.  It’s one of my dreams to have musicians and groups of musicians I revere play together, and the new CD is just such a dream. . . . one that you and I can hear and re-hear.

The disc also affords us a chance to adjust our perspectives, to shake off some preconceptions.  Some listeners have perched Rebecca on a sunny windowsill in the country of Light, Bright, and Sparkling. Yes, she may prefer PICK YOURSELF UP to GLOOMY SUNDAY, but for me a little darkness will suffice.  Hear her on this disc as she sails through I’VE GOT MY LOVE TO KEEP ME WARM and her reputation as an antidote to darkness is intact.  But only shallow listeners will mistake optimism for shallowness: she has depths of feeling. 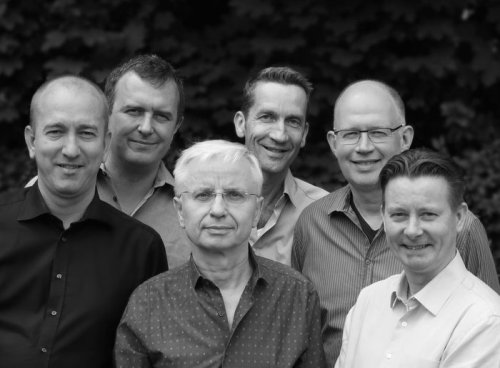 Echoes of Swing has also been slightly mis-characterized, praised for their large orchestral sound (the core unit is four players, count them, four — even though on this CD they add a string bass and guitar as well as Rebecca) — as if they were somehow marvelous simply for this magic trick, and critics have heard them as successors to the John Kirby Sextet, which is both plausible and confining.  But on this CD, the players — whom I should name now: Bernd Lhotzky, piano and musical director; Colin T. Dawson, trumpet and flugelhorn; Chris Hopkins, alto saxophone; Oliver Mewes, drums, with Henning Gailing, string bass, and (on four tracks) Rolf Marx, guitar — create such rich varied sounds inside and outside of the arrangements by Bernd and Chris that I felt as if I’d wandered into a universe scored by, let us say, Gil Evans, spacious and resonant.

Other artists have created records and CDs devoted to Winter.  And many of those jolly efforts are avalanches of fake snow from the arts-and-crafts store.  Christmas music looms, no matter how many chairs might be wedged against the studio door, or there’s LET IT SNOW, the now-troublesome BABY, IT’S COLD OUTSIDE, or WINTER WEATHER.  Sweet, certainly, but not always true to the reality of the season, for Winter is a time for introspection as the world becomes colder and darker.  This disc, I assure you, is not a descent into Seasonal Affective Disorder, and there are a few familiar cheery songs on it, but it is not the usual forgettable fluff.

Here’s a wonderful example, the text being the 1931 WINTER WONDERLAND, where the focused purity of Rebecca’s voice balances against a complex, shifting orchestral background:

Rebecca’s own witty and sweet song:

You’ll have to explore the other surprises for yourself — songs I’d never heard by Frishberg, Berlin, and Jobim, and a few poems set to music by Bernd — performances that are remarkable on the first hearing and grow more so.

The disc is dense — which is not to say difficult or off-putting — but it has levels and levels of musical and emotional pleasure.  Some discs make wonderful background music — the soundtrack for rearranging one’s spice rack — but this one has the delicious resonance of one short story after another.  It’s available in all the old familiar places.  Details here. WINTER DAYS is ambitious, heartfelt, completely rewarding.  You won’t regret it, no matter what the temperature.

Posted in "Thanks A Million", Bliss!, Generosities, It's All True, Jazz Titans, Jazz Worth Reading, Pay Attention!, Swing You Cats!, That Was Fun!, The Heroes Among Us, The Real Thing, The Things We Love, Wow!