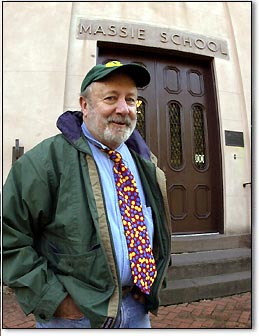 The genial man to the left doesn’t exactly resemble Sherlock Holmes or even Dr. Watson, but he’s helped me solve a nagging mystery.  He’s Dr. Julius “Boo” Hornstein, longtime resident of Savannah, Georgia, and chronicler of its varied jazz scenes.  His research, memories, and appropriate photographs have been published in his book, SITES AND SOUNDS OF SAVANNAH JAZZ (Gaston Street Press).  In it, I found more than I’d expected about King Oliver’s last days and his benefactor Frank Dilworth — and anecdotes about Jabbo Smith, Johnny Mercer, Ben Tucker, and other improvising natives.

But that’s not the reason I’m writing this post.  Exhibit A:

Recorded by Louis Armstrong and his Hot Seven in 1927, POTATO HEAD BLUES has been a mystery to many for nearly eighty years.  The music itself isn’t mysterious — exultant, rather — but the title has puzzled jazz enthusiasts forever.  Some plausibly have thought it came from the teasing way New Orleans musicians made up names for each other based on essential physiognomy — and one of my readers, Frank Selman, wisely suggested that the title was a sly dig at Clarence Williams, whose cranial structure resembled an Idaho Russet.

Eighty pages into Dr. Hornstein’s book, we meet Sam Gill — not the Brooklyn-born bassist who recorded and played with Randy Weston, Monk, and Blakey, but a Savannah-born trumpet player who (as a young man) had met the down-on-his-luck Joe Oliver.

But I’ll let Dr. Hornstein lead us back to POTATO HEAD BLUES:

Sam Gill is the kind of guy who likes to tell a story.  Consider this.  We’re sitting around City Market Cafe one early summer afternoon, and Sam is holding forth.  “You ever heard the expression ‘potato head’?  You know, ‘So-and-so is nothing but a potato head?’  No one in our group can rightly say that we have, so Sam proceeds to set us straight.  ‘Well, the expression goes way back in time and has to do with the parades which frequently took place on West Broad Street.  If you were an important figure in the black community, say, a businessman, it was expected of you to have your own band to march in the parades.  The bigger the band, the better in terms of your the image.  So, every now and then you would beef up your band with one or two good-looking men.  The problem was, a lot of the time these fellows looked good, but they couldn’t play.  So, you’d put a potato in the bell of their horns and let them march.  Of course, no sound came out, but that was okay ’cause you only wanted the guys to look good.  That’s how they got to be known as potato heads.”

You have no idea how relieved I am by this riddle, now unraveled for all time.  And how prescient of Louis not to have turned to his band and said, “Boys, I have a new song for us: it’s about those street parades in New Orleans.  You’ll never forget it: BLUES FOR THE CATS WHO COULDN’T PLAY SO WE HAD TO MAKE SURE WE COULDN’T HEAR THEM PLAY A NOTE EVEN THOUGH THEY WERE SHARP-LOOKING CATS.  One, two!”

Posted in "Thanks A Million", Irreplaceable, Jazz Worth Reading, Pay Attention!, Swing You Cats!, The Heroes Among Us, The Real Thing, The Things We Love