When the conversation turns to the great swinging bands before “the Swing Era,” the names that are mentioned are usually the Luis Russell Orchestra and Bennie Moten’s Kansas City aggregations, Henderson, Ellington, Goldkette, Calloway, and Kirk.  Each of these bands deserves recognition.  But who speaks of McKinney’s Cotton Pickers?  (Is it the name that so embarrasses us these days?) 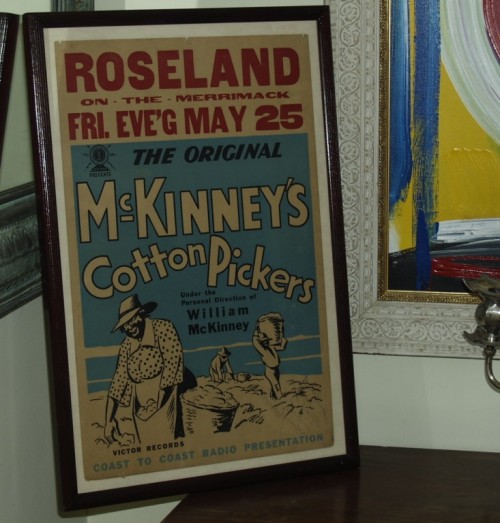 The song and performance that so enthralls me is from their last record date in September 1931 — DO YOU BELIEVE IN LOVE AT SIGHT? — composed by Ted Fio Rito and Gus Kahn. I am assuming that it was originally meant as a love ballad, given its title and world-view, but the band takes it at a romping tempo. (Was it played on one of their “coast to coast radio presentations”?  I hope so.) Several other marvelous features of this recording have not worn thin: the gorgeous melody statement by Doc Cheatham; the incredible hot chorus by Rex Stewart; the charming vocal by Quentin Jackson; the tenor saxophone solo by Prince Robinson, the arrangement by Benny Carter, and the wondrous sound of the band as a whole — swinging without a letup.

Here, thanks to our friend Atticus Jazz — real name available on request! — who creates one gratifying multi-media gift after another on YouTube — is one of the two takes of DO YOU BELIEVE IN LOVE AT SIGHT?:

I love Doc Cheatham’s high, plaintive sound, somewhat in the style of his predecessor, Joe Smith — and how the first chorus builds architecturally: strong ensemble introduction, trumpet with rhythm only (let no one tell you that tuba / guitar doesn’t work as a pairing), then the Carter-led sax section — imagine a section with Carter, Hilton Jefferson, and Prince Robinson — merging with the brass.  By the end of the first chorus, you know this is A BAND. (I’m always amused by the ending of the chorus, which exactly mimics the end and tag of THERE’LL BE SOME CHANGES MADE.  Nothing new under the sun.) And whose idea — Carter’s? — was it to so neatly use orchestra bells throughout this chart?  Lemon zest to the ear.

But then there’s Rex Stewart’s expert and hilarious solo — he wants to let you know he is here, immediately.  I always think of him as one of those bold trumpeters who, as the tempo speeded up, he played even more notes to the bar, rather than taking it easy and playing whole and half notes.  In this chorus, he seems like the most insistent fast-talker, who has so much to say and only thirty-two bars in which to say it.  Something else: at :56 there is a small exultant sound. It can’t be Rex taking a breath and congratulating himself (as he does in WILD MAN BLUES on THE SOUND OF JAZZ) so I believe it was one of his colleagues in the band saying without the words, “Yeah, man!”

Then a gloriously “old-fashioned” vocal from Quentin Jackson, but one that no one should deride.  He told Stanley Dance that he learned to sing before there were microphones, so that you had to open your mouth and sing — which he does so splendidly here.  He’s no Bing or Columbo, wooing the microphone: this is tenor singing in the grand tradition, projecting every word and note to the back of the room.

The final chorus balances brass shouts and the roiling, tumbling Prince Robinson, who cuts his own way amidst Hawkins and Cecil Scott and two dozen others: an ebullient, forceful style.  And by this chorus, I always find myself rocking along with the recording — yes, so “antiquated,” with tuba prominent, but what a gratifying ensemble.  Yes, I believe!

Here is what was to me the less familiar take one:

It is structurally the same, with the only substantial difference that Rex continues to play a rather forceful obbligato to Quentin’s vocal — almost competing for space, and I suspect that the recording director at Camden might have suggested (or insisted on) another take where the vocalist was not being interfered with.  How marvelous that two takes exist, and that they were recorded in Victor’s studios in Camden — a converted church with fine open acoustics.

There is a third version of this song, recorded in 1996 by Doc Cheatham and Nicholas Payton — sixty-five years later, but for me it is a descent from the heights.  You can find it on YouTube on your own.

Whether or not you believe in love at sight (that’s a philosophical / emotional / practical discussion too large for JAZZ LIVES) I encourage you to believe in the singular blending of hot and sweet, of solo and ensemble, that is McKinney’s Cotton Pickers.  One has to believe in something.

Posted in "Thanks A Million", Bliss!, Generosities, Hotter Than That, Irreplaceable, It's A Mystery, It's All True, Jazz Titans, Pay Attention!, Swing You Cats!, That Was Fun!, The Heroes Among Us, The Real Thing, The Things We Love, Wow!