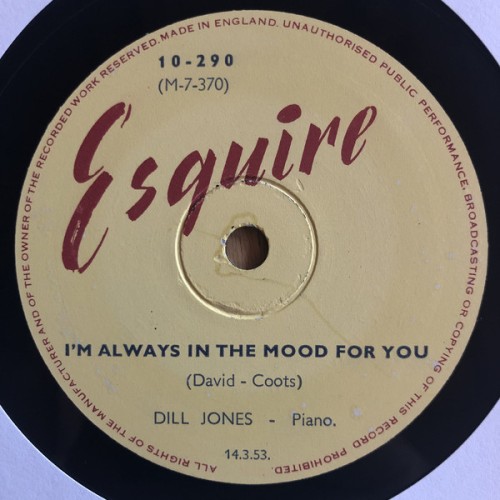 When the Welsh jazz pianist and composer Dill Jones (born Dillwyn Owen Paton Jones) died far too young in 1984, the New York Times obituary was titled Dill Jones, Pianist, Dies at 60; Expert in Harlem Stride Style.  No one who ever heard Dill rollicking through Waller, James P., Sullivan, or his own improvisations on ANYTHING GOES, could quibble with that.  But Dill was so much more, and now we have a half-hour’s vivid evidence, on several pianos, in his homeland (I don’t know a date, but I see that this recital was recorded in BBC Llandaff, Studio C1. — and Dill’s trio partners are Craig Evans, drums; Lionel Davies, string bass.  The songs are GRANDPA’S SPELLS / I WANT TO BE HAPPY (interpolating HANDFUL OF KEYS) / SLOW BUT STEADY (trio) / JITTERBUG WALTZ (solo) / A HUNDRED YEARS FROM TODAY (solo, Dill, vocal)  hints of boogie and IN A MIST / ON GREEN DOLPHIN STREET / YELLOW DOG BLUES (trio) / Reprise: GRANDPA’S SPELLS:

I saw Dill first as a member of the JPJ Quartet (Budd Johnson, Bill Pemberton, and Oliver Jackson), then at a solo recital in April 1972, thanks to Hank O’Neal — with Eubie Blake, Teddy Wilson, Claude Hopkins, as pianist in the Basie-reunion small band “The Countsmen,” and with Mike Burgevin, Sam Margolis, and Jack Fine in Doylestown, Pennsylvania, circa 1974.  The last time I saw Dill was not in person, but on one of Joe Shepherd’s videos at the Manassas Jazz Festival in December 1983, a tribute to Bobby Hackett and Vic Dickenson at the Roosevelt Grille (with Ernie Hackett, Larry Weiss, and Vic): Dill was not in good health but I can hear his ringing piano even now.

His stylistic range was broad and authentic: he could play in the best two-handed style but also be sweetly ruminative, and his musical intelligence was not limited to any one period.  And in our one person-to-person meeting, he showed himself as unaffectedly funny, gentle-spirited, articulate, and full of feeling.  A rare man, not only at the piano.

Posted in "Thanks A Million", Awful Sad, Bliss!, Generosities, Irreplaceable, It's All True, Jazz Titans, Pay Attention!, Swing You Cats!, That Was Fun!, The Heroes Among Us, The Real Thing, The Things We Love, Wow!