I had a wonderful time last weekend at the one-day jazz festival — the little party thrown by the Juvae Jazz Society in Decatur, Illinois.  Friendly kind people, hot music, sweet sounds, and good feelings in the Flatland.

Andy made his name with most jazz audiences (I saw him, with Dave Bock, first in 2007, alongside Dan Barrett at Jazz at Chautauqua) as a hot cornetist, the closest thing to “the dear boy” possible.  But in the intervening years, he’s branched out to embody a whole variety of cornet styles, and he’s also shown himself to be a fine tenor player in the Jack Pettis mold, and a spectacular  clarinetist, evoking Tesch, Mezz, and Jimmie.  That’s Teschemacher, Mezzrow, and Noone for the newcomers.

The last fellow on that list — facetiously called “Jimmie No-One” by Kenny Davern, who loved his playing, is our subject today.  Noone’s little Apex Club band featured himself on clarinet, Doc Poston on alto, Earl Hines on piano, Bud Scott on banjo, Johnny Wells on drums, and Lawson Buford or Bill Newton on tuba.  This little band’s most remarkable trademark was the interplay between Noone and Poston, who had worked with Freddie Keppard and Doc Cook earlier.  Incidentally, I’m told that the Apex Club was at 330 East 35th Street on the South Side of Chicago.  Here is a current view of that address, not inspiring.  Sic transit gloria mundi.

Even though the architecture is obliterated, the music remains, so here are the Chicago Cellar Boys becoming the Apex Club Orchestra on two selections — one unrelated to Noone, the other a direct hit.

EL RADO SCUFFLE was in the band’s book, and I read somewhere that the club Noone’s group was working at was the El Dorado, but some letters were missing from the sign or some lights didn’t function.  If that was the Scuffle or something larger I can’t know: create your own stories to this soundtrack:

Delicious.  And more to come.

Before there was a way to order takeout food with your smartphone, before Blue Apron and Peapod sent the makings of meals and grocery orders to your door, there were mobile food vendors aplenty.

I’m not talking about the Good Humor Man, the iceman, or the milkman.  Or the man who went door-to-door, selling uncooked pizza dough, plastic envelopes of tomato sauce and cheese as a less-expensive alternative to takeout pizza.

I mean Serious Food: the Hot Tamale Man!  (Incidentally, for purposes of this post, I am — for once — putting aside all possible double-entendres arising from the shape and heat of this filled delicacy, and a tamale is a tamale.)  Tamale sellers were a familiar phenomenon in cities, providing passers-by with inexpensive hot meals.  When I was Craig Ventresco’s guest in San Francisco more than a decade ago, as we were entering some transit station, he pointed to a woman selling tamales from a small corner stand: pork or chicken, a dollar apiece, and memorable.

Dining Chicago offers a feast of information about Chicago tamales, their origins (more African-American than Mexican) with appropriate musical examples.  But food history is not really my subject, although I wouldn’t chase away a hot tamale vendor beneath my window.  No, it’s hot music — and this recording — featuring Freddie Keppard and Jimmie Noone — its label as examplar: 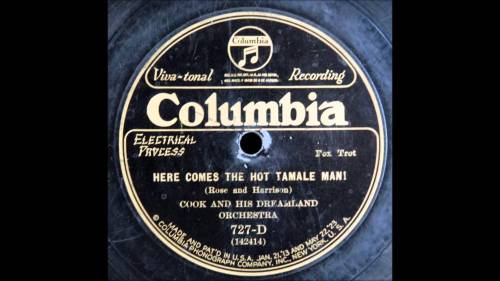 All that is wondrous historical evidence, but here’s something fresh and spicy: pianist / singer Carl Sonny Leyland and cornetist Marc Caparone’s performance of HERE COMES THE HOT TAMALE MAN at the 2017 Durango Ragtime and Early Jazz Festival, video-recorded by YouTube’s  “banjojudy” (that’s Judy Muldawer to the rest of the world) — who recorded a great deal of the Durango Festival, March 24-26, both audio and video, and offers it to us here.

And here’s the portable feast:

You’ve heard the expression countless times, “Don’t try this at home”? I suppose you could attempt to play Jelly Roll Morton’s JUNGLE BLUES at home, but if you don’t have the proper equipment, I suggest you stick to your iPod.

This was recorded for our listening and dancing pleasure at the Zal Gaz Grotto, Ann Arbor, Michigan, on April 5, 2015, by JAZZ LIVES’ Michigan Bureau Chief, Laura Beth Wyman, and her well-trained staff.

I think such things are best left to the professionals. Even if, by chance, you did have a gong in your basement, the rest of the ensemble is not easy to assemble and train.  But the gong is paramount here.

For those unfamiliar with the sound of clarinetist Jimmie Noone, here he is with his 1928 Apex Club Orchestra — Doc Poston, alto sax; Earl Hines, piano; Bud Scott, banjo; Johnny Wells, drums — playing EVERY EVENING (I MISS YOU) courtesy of “ptm51” on YouTube:

Noone (1894-1944) should be known to a wider audience today, and a new bio-discography, JIMMIE NOONE, JAZZ CLARINET PIONEER, by James K. Williams with a discography by John Wilby, is just what is needed.

Noone did not lead a melodramatic life (jazz musician as martyr) so the narrative is a compact one — but the book is evocatively documented with photographs and newspaper clippings, and Wilby’s discography is admirably thorough.  Noone was born in Louisiana and was playing Albert system clarinet alongside Freddie Keppard as early as 1913, working with a wide variety of New Orleans bands.  Going north to Chicago, he played and recorded with King Oliver and Doc Cook.  In 1926 Noone began leading his own groups — most notably at the Apex Club — which often moved away from the traditional instrumentation to an all-reed format, sometimes augmenting his band for recordings.  During the Thirties, Noone led a variety of touring bands, and he moved to the West Coast for the last three years of his life.  At the time of his death, he was being featured on radio broadcasts hosted by Orson Welles.  Had Noone lived longer, he would have been venerated much as Bunk Johnson and Kid Ory were for their part in playing “authentic” jazz.

Noone’s influence goes beyond this rather limited summary of his travels and club dates.  He and a very young Benny Goodman went to the same classical clarinet teacher, Franz Schoepp, who often had Goodman linger to play duets with Noone.  And I can hear the echoes of Noone’s technical facility in Goodman’s playing — as well as the songs Goodman loved, SWEET SUE, SWEET LORRAINE, and I KNOW THAT YOU KNOW, all Noone favorites.  (I hadn’t known until I read this book that Teddy Wilson had also worked with Noone.)  I think that there’s a clear line to be drawn from Noone’s Chicago bands to the Goodman trios and quartets.

And Noone travelled in fast company: a record session for OKeh featuring a wonderful quartet of Louis Armstrong, Noone, Hines, and Mancy Carr has some fine playing.  Comments by other jazz musicians — Coleman Hawkins and Bud Freeman among them — testify to the effect Noone had on players such as Bix Beiderbecke.

In our time, the Noone influence is clearest in the work of Kenny Davern and Bob Wilber, whose Soprano Summit and Summit Reunion owed a good deal to the hot polyphony of Noone’s Apex Club Orchestra.  Other clarinetists, such as Frank Chace, admired Noone greatly (an early private recording of Chace has him taking his time through a slow-motion APEX BLUES).

Williams’ book is admirable in its reliance on documented evidence and the clarity of its vision.  He does not make exaggerated claims for Noone as a player or a trail-blazer, but every page has information that was new to me.   The book is 120 pages including more than 80 rare illustrations — photographs from the Frank Driggs and Duncan Schiedt collections as well as historic Noone documents, rare record labels, and pages from the Chicago Defender.  The price is $20 (US) per copy plus shipping ($4 to US; 4.50 to Canada; 8 overseas).  Order from James K. Williams, 801 South English Avenue, Springfield, Illinois 62704; email tubawhip@comcast.net; phone 217.787.3089.  Paypal preferred; personal US check or postal money order accepted.