Exultant, too!  That’s Ed Hall on the left, Henderson Chambers on the right.  Was this taken by William P. Gottlieb?  It wouldn’t surprise me.  We owe the photographer heartfelt thanks.

What we owe Louis goes beyond words.

Posted in "Thanks A Million", Jazz Titans, Pay Attention!, The Things We Love

I wish that the title of this posting referred to some newly unearthed recordings that had both of these jazz poets improvising together.  Unfortunately, although such a meeting might have taken place, the recorded evidence may not exist.

Newton, whom I’ve written about before, remains beautiful yet shadowy.  The sensitivity we hear in his playing also made him one of jazz’s revered yet most elusive figures.  That same sensitivity apparently made him a man greatly burdened by the injustices around him: racial prejudice coupled with the inartistic nature of “the music business.”  Surely the frequent periods of illness he suffered were not merely the result of a frail constitution: he had power and self-assurance.  But they seem to be necessary periods of retreat from a world that repelled him.

Pee Wee Russell lived longer and had more opportunities to play and create alongside everyone from Arthur Schutt to Bobby Hackett to Thelonious Monk.  But he, too, was hampered by factors that he must have found demeaning: the musicians who had once cherished him treated him more as a clownish spectacle, someone who made freakish sounds and faces.

But there’s good news — so remarkable that only italics are suitable:

The Jazz Museum in Harlem will be devoting a Saturday afternoon to Newton and Russell.

On March 28, from 10 to 4, they will be celebrating the lives of these two creative improvisers.  Not, mind you, in the usual way, by simply playing their records.  I would guess that they would show us Newton and Russell on film (Pee Wee shows up in a variety of contexts over the years; Newton, I believe, is only visible once, if that).  But we will get to hear about these two men from people who were there. Readers of this blog will know the value I place on first-hand testimony, especially since the original players and the people who witnessed their miraculous work are becoming fewer.

The panel will be held at the National Jazz Museum in Harlem Visitors’ Center, at 104 East 126th Street.  And it’s free.  “Don’t miss it!” is a real cliche when the event doesn’t warrant it, but it means something for an event like this.  And in the meantime, I hope readers can remind themselves of the beauties Newton and Russell created for us to hear. 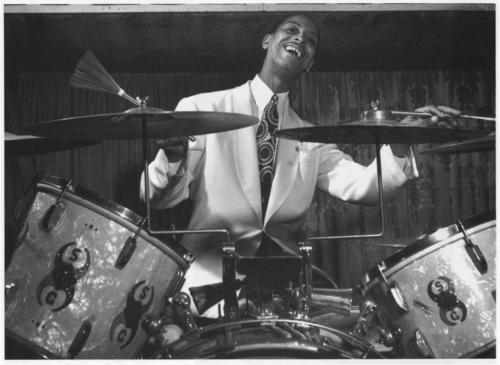 William “Sonny” Greer, who played drums for Duke Ellington for nearly thirty years, never received the acknowledgment he deserves.  True, he could be more interested in decorating the ensemble than in simply driving them to the finish line.  Musicians who played with Sonny as he got older said that he was sometimes unreliable, that he drank too much.  But all those statements matter very little when measured against the musical evidence.

Today I was listening to the second half of the 1940 Fargo, North Dakota dance date.  That evening has achieved mythic status because two undergraduates recorded the music and kept the discs safe — so we can hear Ben Webster and Jimmy Blanton tenderly exploring STARDUST.  But consider “Fargo, North Dakota,” and “dance date,” both factors to be examined: a touring band played a thousand such dates, and there was no reason for the musicians to be particularly attentive on any given night.  Wintry North Dakota was far away from uptown New York in ways that transcend the distance one could measure on a map.  But Greer’s playing is simply extraordinary: the ebb and flow of the sounds he creates (he didn’t have one or two trademark patterns — think of Cozy Cole’s press roll or Jo Jones’s hi-hat).  Sonny Greer made sounds that fit what everyone else was playing — or perhaps he made the sounds that pleased him most at that split-second.  So to those listeners who are accustomed to drumming that utilizes a steady ride-cymbal beat, for instance, Greer at first sounds like an accompanist rather than a jazz drummer, echoing what the soloist is doing with a splash or an auditory comment.  But closer listening reveals that he is leading far more than following, and that the surging rhythms he creates are pushing the band.  Of course, some of what Greer was doing in 1940 got picked up by people who didn’t understand how a drummer could be playing loudly, creatively, and exuberantly — and still not overshadow the other players.  Sonny could do that, as could Sidney Catlett.

But John Hammond criticized him in print, as did others.  However, Hammond and the others always had their own ideas of what the Ellington band and other bands should sound like.  Ellington wouldn’t have kept Greer at his side for so long simply for youthful loyaty.  (Keeping Greer on salary until his death was an example of such feelings, but Ellington didn’t keep anyone in the band whose work didn’t add something — whether or not jazz critics recognized it mattered not at all.)

So I would send readers back to the Fargo concert, to ROCKIN’ IN RHYTHM and ST. LOUIS BLUES, and to the panoply of tone colors Greer adds even at slow tempos.

My friend the Jazz Sage Sam Parkins sent in this story: “One ‘once in a life-time’ jazz event: In spring of ’58 or so I was doing Yale Reunion with Eli’s Chosen Six, only 2 Yalies left (Roswell Rudd and bassist Bob Morgan). We were doing class of ’48; Sleepy Hall showed up and played awesome banjo – voice leading like a Bach chorale. In the tent next to us, some class had signed on Bud Freeman and a quintet. Now Sonny Greer was a bit of a laughing stock – drunk, didn’t play too good at best etc. Here he is on a Saturday afternoon, hadn’t had a drink yet, and I’m transfixed. Never settles down to press rolls or a steady cymbal beat like Jo Jones. He’s dancing lightly all over the kit, with clean even swing, and propelling the band out the door. Never seen anything remotely resembling it before or since. AND – the next fall there’s a typical quasi-Jazz at the Philharmonic monster rally at the Cinderella Club, incl. me – and Greer. Playing barely so-so. The jazz life.”

I have my own Sonny Greer story.  In the early Seventies he and the brilliantly eccentric pianist Brooks Kerr had a duo gig at Gregory’s, a shoebox of a club.  I took my then-girlfriend there one night.  She was a classic Irish Catholic beauty: shining dark hair, pale skin, and blue eyes.  That night she sported a fake fur coat.  Between sets, I approached Sonny and asked him if he would autograph an Ellington lp that had his picture on the cover, which he did happily.  He seemed minute and beautifully-preserved: a wonderful miniature figure of A Jazz Drummer.  But nothing got past him.  He spotted my girlfriend and locked his eyes to hers with a steady devouring stare and the quietly exuberant words, “Sonny just LOOOOOOVES YOU,” which I hear as I write this.

On the left is an Ellington 78 issued under Sonny’s name, and here’s that famous Soundie (1942) of the Ellington band performing C JAM BLUES.
The short film is called “JAM SESSION,” and its fictions are endearing: the musicians are of course performing to their own soundtrack, but it doesn’t matter.  Notice Rex Stewart pretending to unpack his cornet while Ray Nance is playing, Ben Webster rising from his lunch-counter stool, playing as he goes, Tricky Sam Nanton waggling his plunger, and Sonny — beaming at the camera in his beautiful clothing before crossing to the drums to play a wondrously showy hot solo, twirling his sticks as he goes.
“Luck always” is what Sonny wrote above his name on the cover of my record.  Clearly, he had it and shared it with us.
Something I find particularly thrilling in the online playground is that if you go to the Rutgers University Libraries website:http://newarkwww.rutgers.edu/IJS/johpaudio/SonnyGreer_audio.html
you can hear Sonny himself telling stories.  Priceless generosity on all fronts!

Posted in Jazz Titans, Swing You Cats!, The Real Thing, The Things We Love

No, this post isn’t about Benny Goodman’s 1928 recording — although that record does deserve to be celebrated.  Rather, it’s about a jazz immersion because of what my college calls “Presidents’ Week” — the Monday holiday stretching into a full week to follow the public school calendar.

What that means for me (and the Beloved) is a wonderful chance to hear four live jazz sessions.

Sunday night I went to the Ear Inn, newly lit and full of people celebrating that they, too, didn’t have to get up early the next morning.  The EarRegulars were there in stellar form: Jon-Erik Kellso and Matt Munisteri, with their inspiring friends Scott Robinson and Greg Cohen.  I was sitting three feet from Greg’s bass, and it was a transforming experience: the rhythm shot through me all night long.  And Scott — the mysterious shape-changer of jazz, who finds a new self whenever he picks up a different horn — was in a happy groove from the opening notes of WEARY BLUES.  (Scott had brought his tenor, a cornet — I couldn’t see if it was his fabled echo cornet) and his sopranino sax.  In the second set, Rachelle Garniez sat in with her Hohner claviola, Ted G (we couldn’t figure out his last name) brought his Maccaferri guitar, and Lucy, sixteen years old, sat in on trumpet.  As they used to say in the society pages of small-town newspapers, “a good time was had by all.”

Last night I went to Banjo Jim’s to catch a return appearance of the Cangelosi Cards with their guest star Sam Parkins, who had brought “his Klarinette.”  If you want to get the flavor of that evening, I’ve posted clips from their last jam session on “LIGHTNING IN THE DARKNESS.”  It was a smaller hand of Cards — Tamar Korn, Jake Sanders, Karl Meyer, Marcus Millius, Gordon Webster, and Cassidy Holden (who uses gut strings on his bass — as the great players of the Swing Era did).  The joint rocked: Tamar sang the blues and ALL OF ME; the Cards turned into a gypsy /tango band with NUAGES, MINOR SWING, and their own line on LOVE ME OR LEAVE ME.  Heady stuff!

Tonight, the Beloved and I are going to the 8 PM show at Iridium to hear Barbara Rosene and her New Yorkers.  Enough said!  Barbara will sparkle and move us, and the New Yorkers include Jon-Erik, Michael Hashim, Conal Fowkes, Matt Szemela, Doug Largent, and Kevin Dorn — fine players and fine friends.

And (if that weren’t enough) we’re going downtown on Thursday for the 36th Anniversary HIGHLIGHTS IN JAZZ concert, featuring David Ostwald’s Louis Armstrong Centennial Band (or the Gully Low Jazz Band, what you will) — Jon-Erik, Wycliffe Gordon, Anat Cohen, Mark Shane, David himself, and Kevin Dorn.  Jack Kleinsinger’s concerts are always models of jazz generosity, and this one includes a pair of raw recruits named Joe Wilder and Dick Hyman.

Yes, I still have to grade two more sets of student essays, but I would call this A JAZZ HOLIDAY.  Wouldn’t you?  And I haven’t even mentioned the Gully Low Jazz Band’s regular Birdland gig on Wednesday and a midday solo piano outing for Hyman at St. Peter’s Lutheran Church in midtown.

New Yorkers are lucky to live in this time and place, the economy notwithstanding.  Go and hear some live jazz, even if you don’t have the week off.

Posted in "Thanks A Million", Ideal Places, Pay Attention!, Swing You Cats!, The Heroes Among Us, The Real Thing, The Things We Love